You are here:
September 7, 2019Leave a commentPress ReleasesBy mary 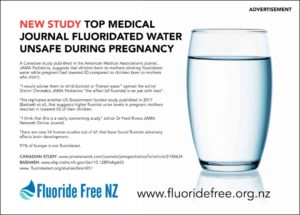 Critics of the fluoride-IQ study published this month in JAMA Pediatrics claimed it needed replication. However, the Canadian study by Green (2019) was already a replication of another U.S. government-funded study published in 2017 by Bashash, which found similar effects, reports the Fluoride Action Network (FAN).

Both were Mother-Offspring studies that used urinary fluoride levels during pregnancy to assess cognition in the paired offspring.

Both studies have shown a strong relationship between maternal exposure to fluoride and lowered IQ in offspring. Each revealed that the fetal stage appears to be the most vulnerable time period for fluoride’s neurotoxicity.

Actually, FAN points out that there have been five studies that have found this relationship between maternal exposure and lowered IQ in children (see listing below). However, the Canadian study is the first to compare fluoridated vs non-fluoridated cities. The pregnant women in Canada with higher urinary fluoride levels had offspring with lower IQs and were from the fluoridated cities.

Paul Connett, PhD, FAN Executive Director, says, “For years promoters of fluoridation have argued that there is no harm from fluoridation; these and other studies indicate that there is potential harm and it is serious. It is unconscionable to continue fluoridation until this is resolved. For those who doubt the current findings more studies can be done once a moratorium on fluoridation is in place. To do otherwise is to condone a human experiment on millions of children.”

Connett adds, “To ignore brain health and continue fluoridation in name of dental health is a huge disservice to the children of this country. FAN argues that there are more effective programs to reduce dental inequities (eg, ‘Childsmile‘ in Scotland) and communities can easily implement them.”

The Mother-Offspring studies, listed below, can be accessed on our website.